Florence died of yellow fever when she was 10 years old. During her short life she was extremely frightened of storms and whenever one occurred she would rush to her mother to find comfort. 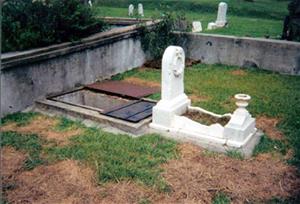 Upon her death her mother was so struck with grief that she had Florence's casket constructed with a glass window at the child’s head. The grave was dug to provide an area, the same depth of the coffin, at the child’s head, but this area had steps that would allow the mother to descend to her daughter’s level so she could comfort Florence during storms. To shelter the mother during storms, hinged metal trap doors were installed over the area the mother would occupy while at her child’s grave.

In this picture you can see the trap doors behind little Florence’s tombstone, which covers the stairway her mother used. They can still be opened today.

In the mid 1950s a concrete wall was erected at the bottom of the stairway covering the glass window of Florence’s coffin to prevent vandalism.