Create an Account - Increase your productivity, customize your experience, and engage in information you care about.

This actor portrays Captain Bowie during the 2000 Angles on the Bluff Tour. Bowie was a Confederate Cavalry officer who holds a rare distinction.

During the Civil War a Union gunboat was in the vicinity of Yazoo City, Mississippi and was tied up along the riverbank. 1 day while on patrol Captain Bowie and his men found the gunboat aground because the Yazoo River had dropped very fast overnight. 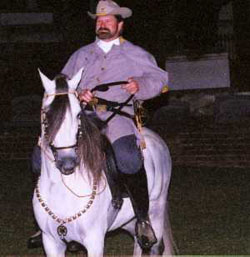 Upon seeing the gunboat grounded Captain Bowie yelled "Charge" and he and his men boarded the gunboat while mounted on their horses.

This is the only recorded military record where Calvary is credited with capturing a navel vessel.