These actors tell the sad but true story of Ibrahima during the 2000 "Angles on the Bluff" tour. While Ibrahima is not buried in Natchez some of the people who helped gain his freedom are. 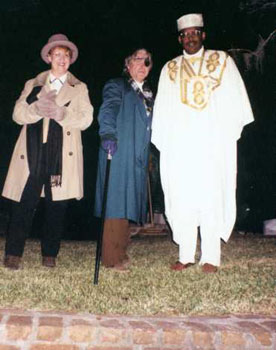 A Prince Among Slaves

Son of A King

In August 1788, a dirt farmer named Thomas Foster of Natchez purchased for $930 two slaves--dos negros brutos the deed said, meaning that they were recent imports from Africa. One of the slaves was named Samba, meaning "second son" in the Pular or Fullah language of their native locale in the Futa Jallon country of modern Guinea. The other captive had a much more unusual name and finer pedigree: Abd-al-Rahman Ibrahima. He was the son of Sori, the alimami or theocratic ruler of the Fulbe (plural for Pullo) whose capital was Timbo, an inland center that traded with distant Timbuktu where Ibrahima had earlier received Islamic training.

Some months prior to being sold in Natchez, and in command of a cavalry detachment in his father's Islamic army, Ibrahima had been assigned to punish coastal tribesmen interfering with Fulbe trade. The rebels ambushed the troop and captured the commander. Fearful of King Sori's revenge, the rebels sold Ibrahima to slaves or native African slave traders rather than kill him.

After purchasing Ibrahima and being told of his royal blood, Foster learned about the possibility of ransom in cattle and other valuables. But the young and uneducated American yeoman thought the road to wealth required hard labor on native soil not a ransom exchange with Africa and he refused the proposition. However, upon learning one of his slaves was the son of a king Foster dubbed his new prize "Prince"

On one occasion a recently imported African from Futa Jallon, possibly an enslaved Jalunke (a non-Fullah black), met and recognized Ibrahima in Natchez. "Abduhl Rahahman" (Ibrahima)! he cried in wonder and fear of so miraculous a sight. At once he prostrated himself on the ground before Ibrahima.

In 1781, an Irish doctor, John Cox, was serving as a ships surgeon off the coast of Africa. He lost his way in the countryside when he and some others went ashore to hunt and Dr. Cox was left behind when the ship set sail. Wandering around, Dr. Cox was near death when he was discovered and taken to the king who had him nursed back to health and eventually returned to civilization.

In 1807, Dr. John Cox, having immigrated to Mississippi, was amazed to discover that his neighbor's slave was the son of King Sori, who had saved his life several years earlier.

Cox tried to purchase Ibrahima in order to free him, but Thomas refused. Cox went as high as a thousand dollars, twice the normal price for a slave like Ibrahima. Two more decades passed with Ibrahima in slavery. Cox died in 1816, but his son, William Rousseau Cox, continued to interest himself in Ibrahima.

Eventually, as an old man, retired from hard labor, Ibrahima gained his freedom through the efforts of a printer, Andrew Marschalk, editor of the Mississippi State Gazette. Marschalk enlisted the aid of Thomas B. Reed, Senator from Mississippi, and of Henry Clay, who was then secretary of state under John Quincy Adams.

Unfortunately Ibrahima did not make it back to his homeland. He died during his long journey home.